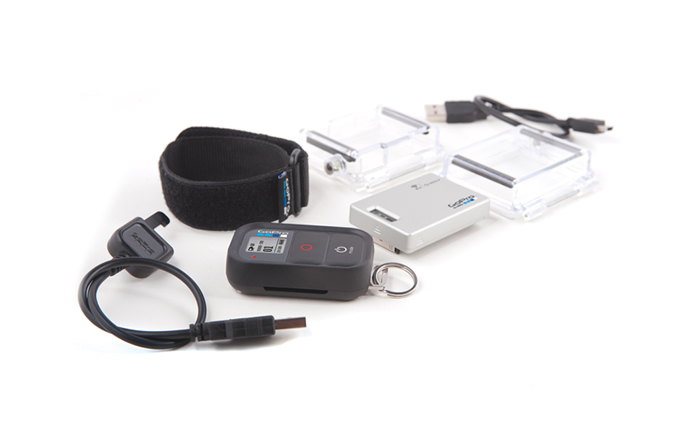 Half Moon Bay, CA (June 4, 2012) /PRNewswire/ — GoPro, maker of the world’s most versatile cameras has just made it easier for people to capture professional quality content during any activity. The company officially released its much-anticipated Wi-Fi BacPac™ + Wi-Fi Remote Combo Kit, allowing people to control multiple GoPro cameras at a time using either a smartphone, tablet, or the included waterproof Wi-Fi Remote.Additional features include live streaming video from GoPro cameras to smartphones, tablets and directly to the web via a soon-to-be-released software update. The Wi-Fi BacPac attaches to the back of GoPro cameras to Wi-Fi enable them. The waterproof and wearable Wi-Fi Remote can control up to 50 GoPro cameras at a time from a range of 600’ (180m).“GoPro makes it easy for people to capture immersive and engaging footage of themselves during their favorite activities,” said Nicholas Woodman, GoPro’s founder and CEO. “The professional quality content our customers are capturing is inspiring them to use several GoPros at a time to document their experiences from multiple perspectives…something you’d normally see only on professional production shoots. A new era of ‘personal production’ has begun and Wi-Fi-enabling our cameras gives GoPro customers even more creative control to capture some of the most meaningful content in the world: their lives. Plus, live streaming video from your GoPro to your smartphone or the web is extremely cool and opens up so many new ways to use a GoPro.” 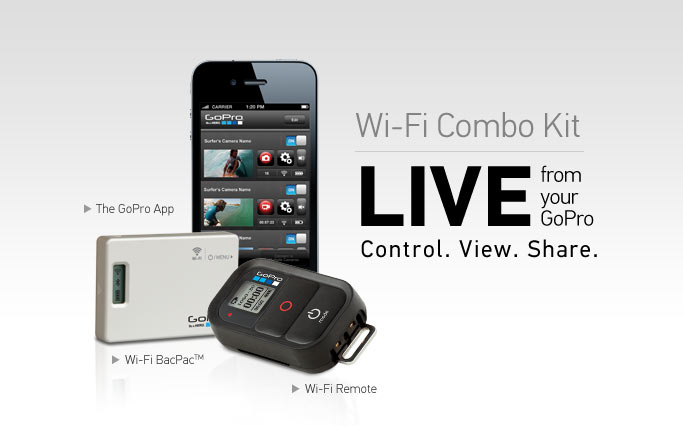 When considering how to celebrate its new product launch, GoPro asked its team of sponsored athletes for their idea of a dream video production that would involve them controlling all of the cameras on the shoot. World-renowned skateboarder Ryan Sheckler had the idea to skate an area of New York City that he’d always dreamt about, documenting his experience using the new Wi-Fi Remote to control 50 GoPro cameras positioned along his path.

The resulting short film, “New York City”, documents a “day-in-the-life” skate from the top of the Manhattan Bridge through Chinatown, finishing at the entrance to the storied Lower East Side skate park – considered by many to be the mecca of street skating. Along the way Sheckler captures not only his inspired skating but also the sites, sounds and color that are NYC. As with all GoPro releases, the film was shot entirely on GoPro cameras.

“This is something I’ve always wanted to do,” said Ryan Scheckler. “To skate through a part of New York City that thousands of people ride through every week, feeling the energy of one of the original stomping grounds of street skating. That I finally got to do it and document it with the support of GoPro is awesome. I’m already thinking of my next project and hopefully this inspires other people to realize and document their own creative ideas.”

The Wi-Fi BacPac + Wi-Fi Remote Combo Kit is now available in US for $99.99 on GoPro.com and at retailers across the U.S. and Europe with availability expanding globally and also soon available in Italy. A future software update will enable live video streaming to the web directly from a GoPro camera. Additionally, a free, soon-to-be-released GoPro App will enable GoPro cameras to live video stream to – as well as be controlled by – iOS and Android smartphones and tablets.

GoPro makes the world’s most versatile cameras, enabling people to capture immersive and engaging photos and videos of themselves during their favorite activities. GoPro’s HD HERO line of wearable and gear mountable cameras are used collectively by more consumers, professional athletes, and video production professionals than any other camera in the world. Based in Half Moon Bay, California, GoPro’s products are sold in over 80 countries worldwide and at GoPro.com.

GoPro®, HD HERO2®, HD HERO® & BacPac™ are trademarks or registered trademarks of Woodman Labs, Inc. in the United States and other countries.